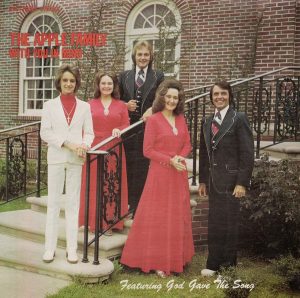 Early in his career, Ken was the pianist for the Blackwood Gospel Quartet and The Toney Brothers. He had studied piano under James D. Walbert and later with Rosa Nell Speer Powell of The Speer Family.

In 1952, he organized the Singing Star Trio with his wife Ernestine, and that group evolved into The Ken Apple Trio. In 1966, the trio was joined by the Apples’ children, Gary, Kevin, Karen, and Kimberly, and they traveled as The Ken Apple Family (also known as The Apple Family). Their daughter Karen would later sing soprano with The Speer Family.

The Ken Apple Family performed across the U.S. and on the Grand Ole Opry, appeared on TBN and programs such as Sing Out America and Bobby Jones Gospel, and even hosted their own TV show for a while. 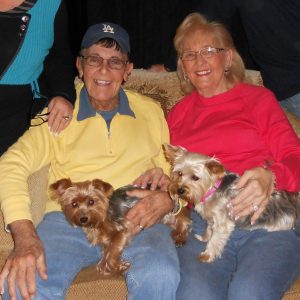 Ken was also a successful and prolific Southern Gospel songwriter, with numerous cuts recorded by The Speer Family, Gold City, The Booth Brothers, The Florida Boys, The Hopper Brothers and Connie, Jerry and the Goffs, The Toney Brothers, The Lesters, and others. A few of his best-known songs are “No Longer a Stranger,” “When We Ask Why,” “Time Cannot Heal, Only God Can,” and “There’s Still Power in the Blood of the Lamb.”

Ken is survived by his wife of 66 years, Ernestine, his children Gary (Stacey) Apple, Karen (Doug) Young, Kevin Apple, and Kimberly Apple. Grandchildren Lori (Hector) Maldonado, Ross Mistretta and Blake Mistretta also survive. In addition, he leaves behind many friends of gospel music and a host of songs that will live on in the hearts of many for years to come.

Services honoring the life of Ken Apple will be held on Saturday, February 15, 2020, at 1 p.m. at the College Park Church of God, 3801 Holmes Avenue, Huntsville, Al 35816, officiated by Pastor Tim Lanier, Pastors Rusty and Leisa Nelson, and Pastor Johnny Minick. Visitation will be from 11 a.m. until the service time. Please keep Ken’s family in your thoughts and prayers.